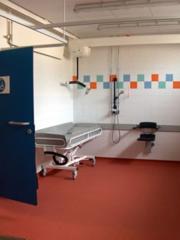 Bradford City Council has been responsible for installing almost all of these and it has plans to install more in the future, including one at the Westfield Shopping Centre.


The Council took on board that whilst most people can take for granted that wherever they are in the district there is a facility that meets their needs, for a significant minority this is not the case.

The Council hopes that their commercial and service partners will follow their lead and do what they can to improve their own facilities so that many families, disabled people and their carers have a much more dignified experience outside of their own homes.

The issues that had to be overcome
Most of the installations were incorporated as part of larger refurbishment where often space and cost dictated what was feasible. The Council found a number of design changes had to be made along the way. As they learnt more about the needs of the client group they tried to improve on the design of the next Changing Places toilet they were installing in a venue. The drainage system is something they learnt needs to be addressed carefully. They also found there is often a trade off between the amount of circulation space and the amount of equipment to be installed.

Making a difference
Feedback about the provision of Changing Places toilets in Bradford has been very positive. The Council also knows that a number of people are now travelling from outside the district to use the facilities in Bradford – where they know their needs can be met. This means that there has been an immediate commercial payback to Bradford City Council for installing them.