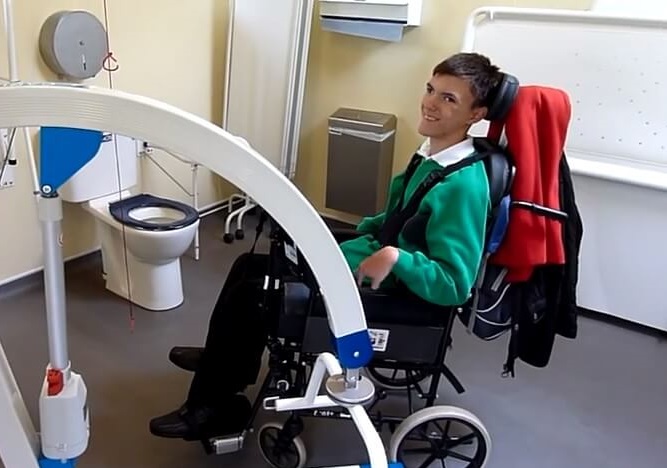 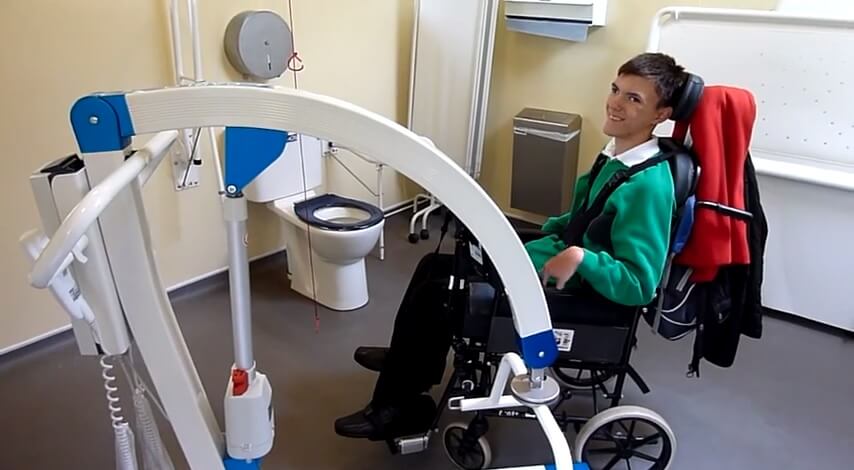 I am Luke Nash, aged 19. I have spent the last 5 years working on the issue that we are all passionate about, Changing Places Toilets. By reading this case study I hope it makes you realise how wide spread the issue is.

When I was little my mum and family used to change me anywhere whether it was difficult or not. As I grew older myself I realised that it couldn’t go on for much longer. Although my parents had no other option they realised how undignified it was. Therefore, I started campaigning for Changing Places Toilets, not just for me, but for all the other 250,000 people alike who depend on these vital facilities.

The moment I realised just how dire the situation was, was when I went to Silverstone for the British Grand Prix for the second year. I went to the medical facilities expecting to see tents with beds which we had used the previous year, only to find that they had changed the medical facilities at Vale (the point of the track I sat at) to a artic lorry with a tail lift, the lift wasn’t working, meaning I could not get to the beds to be changed. The rest of the facilities around the track were ambulances with awnings which were no use.  After about two hours of wandering around trying to find someone who understood what our needs were, a member of medical staff that we had met the previous year appeared, who remembered what we needed.  The only solution they came up with was to use the back of an ambulance. We got me on the lift pushed my chair into the ambulance then was faced with the dilemma of how to get me out onto the stretcher with very little room to move. I ended up knocking her glasses off with my feet. After that weekend I wrote to Silverstone to ask them about provision of adequate toilet facilities They responded saying they had never been asked before about this and would make sure that there was a bed in one of the awnings next year.

Six months later I rang my contact at the circuit to see where the provision would be located for the weekend. All seemed to be in order, but when we got to the point of needing to use the provision unfortunately it wasn’t there. We just got blank looks from medical staff who didn’t understand what we needed. We got the usual response being directed to baby changing facilities. It was really demoralising. Eventually one member of staff seeing how distressed we were getting, rang the circuit medical centre (where the drivers would go), to ask if we could use their facilities. We had to go through a checkpoint which we would not have been able to cross without a member of medical staff to get to the centre of the track. This process took us an hour and a half every time I needed to be changed. Since all the trouble that we had I have managed to get a mobile unit in place for the British Grand Prix. That is one of many achievements that I have had throughout the last five years.

These achievements are something that I am proud of. I have been on local BBC Radio Leicester and campaigned at local disability events which have gone very well, it always amazes me how many people do not realise how much people like me struggle to live a normal day to day life. I have also managed to get a toilet in at Leicester City Football Club. Off the back of that I have been on Channel 4’s No Go Britain. I am also proud that I have written a report on the impact of Changing Places toilets which you can find on their website. I sent this report to newspapers and The Times immediately wrote an article about it highlighting what an important issue it is. I wrote to the Prime minister after a trip to London I had had earlier in the year. I had planned my trip bearing in mind where Changing Places were situated, which in the heart of London are very few and far between. As you can imagine my trip did not go without problems. The toilet at the House of Commons wasn’t working, staff were polite and directed us to the nearest toilet, this was a 25 minute walk, and hard to find as they are never signposted. When we finally got to the toilet at Victoria Embankment Gardens it was out of order due to the fact the hoist was uncharged, my carer wrote a statement saying “The relief soon turned into frustration when realised that the hoist had not been put on charge and so therefore it was unusable”…”Katie and I had to use manual handling to toilet Luke-something which isn’t recommended at all for us or for Luke.” Theresa May took the time to reply and had sent a copy of my letter to Westminster council to inform them of my difficulties. She highlighted the need for legislation change.

I am pleased to say that I am due to open a high dependency toilet with hoist and bed very soon at Warning Zone in Leicester, an interactive centre for teaching children  the dangers of everyday life. I will continue to work with disability organisations to assist in anyway I can to improve disability issues.