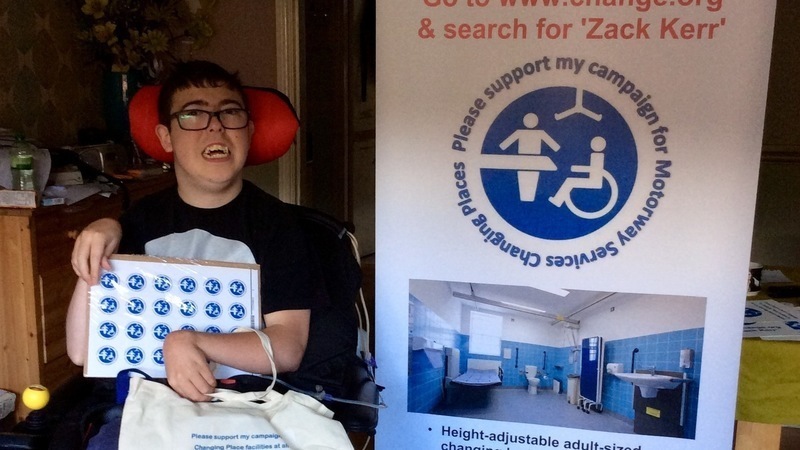 My name is Zack and I am 21 years old. I have cerebral palsy which affects all four of my limbs and my speech. I am tube fed, use a touch screen speech machine and an electric wheelchair to get about. I cannot use a normal toilet and I need help from my parents or carers when getting changed. It is not possible to use a disabled toilet because there isn't enough room and I need a bed and a hoist to get out of my wheelchair. 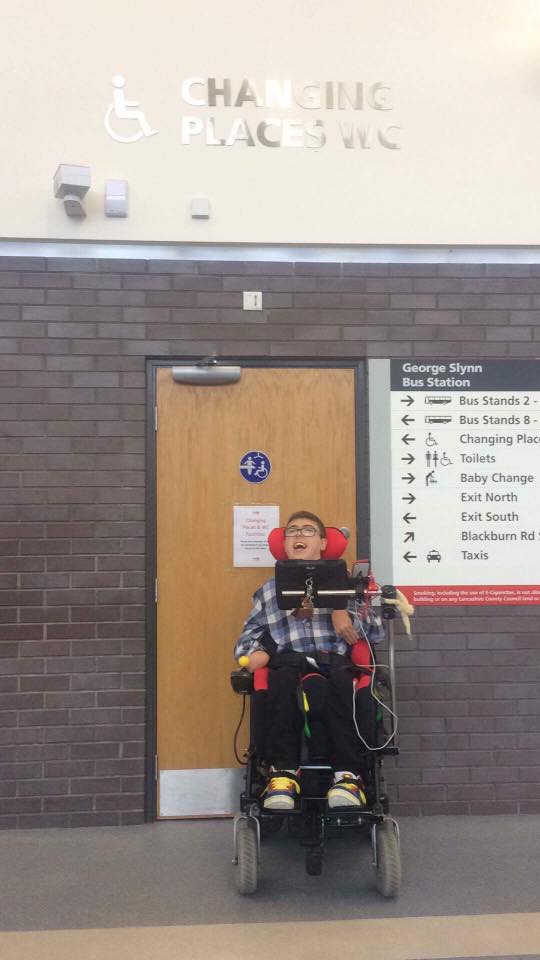 I am campaigning to get accessible changing room facilities, known as Changing Places Toilets, installed at all UK motorway service stations. There are many disabled children and adults who, like me are wheelchair users and require suitable spaces and the assistance of a carers when needing toilet and changing facilities during long journeys. I recently travelled to South Wales to visit friends and family and because of the holiday traffic, the journey was longer than usual. We stopped at three service stations on route along the M62, M6 and M5 but none of them had an accessible changing facility for me to use. By the time we got to our destination, I was very angry and upset that disabled travellers like me do not have access to these very basic facilities like all able bodied people do. So I set about launching my online campaign that night!

I wrote to the managers of Moto who are biggest operator of service stations in UK with 60 stations and asked them why they don't have Changing Place facilities at all of their stations. Here is the reply I received from their PR and Marketing Manager...

Thank you for your email - Moto are committed to the cause of providing accessible changing rooms. We have so far installed 5 changing place facilities at:

These sites have been chosen as they are on major motorway networks. We are committed to installing a further 2 changing places facilities in 2018.

I am very mad at her reply because Moto operate 60 service stations but only 5 have an accessible changing room in them! This is not acceptable. Moto claim that they are committed to this cause but in reality there is real discrimination against disabled travellers. Moto boast that they provide free wifi in all service stations but I find it hard to believe that free wifi is more essential than accessible toilet facilities for all! A Changing Places toilet needs to be large enough, have a height adjustable bed and a hoist which can be used to lift someone out of their wheelchair. I’m not the only one in this situation, there are a quarter of a million disabled people across the country, many of who, are in need of these services too.

Over 1000 facilities are now in operation at tourist attractions, restaurants, museums and leisure centres in the UK, but hardly any exist on major travel routes and so far, all of them are in the Midlands or south of England. Moto are planning a further two rooms in 2018. Welcome Break also have 6 such changing rooms. The operators at Moto claim to be "committed to the cause of providing accessible changing rooms", but in reality they say that the cost of installing such facilities is prohibitive and compared to the popularity of coffee shop and food outlets, it is not justified for the number of people who would use them. It would mean a lot of to me if they led the way by introducing accessible changing places in all their service stations and readdressed the balance in providing accessible facilities for all travellers regardless of their needs and abilities.

Please support my campaign to improve these basic needs for all disabled travellers.

Well it's been almost 2 weeks since I launched my campaign and the support and interest continues to grow daily. After nearly two weeks, the number of signatures on my petition has doubled to over 4000 today! Following a short family break last weekend, I returned to Accrington and was invited to BBC Radio Lancashire's studio in Blackburn early on Tuesday morning to be interviewed by Graham Liver on his breakfast show. It was a great experience! The station continued to feature my story and campaign as one of their headline stories in every news bulletin throughout the day! Then when I returned home Dave Guest, chief reporter for BBC North West news came to visit me at home with a camera crew. He interviewed me and my parents about my campaign and filmed me at home and then we went to Accrington Bus Station to shoot some film sequences at their new Changing Places room which is an excellent facility. My story was featured on the 1.30pm, 6.30pm and 10.30pm North West news and I was very pleased with how well it was reported. Over 34,000 people have viewed the TV report online but it's a pity that not all of them have signed my petition yet! Although it was a very tiring day, I loved being recorded and filmed on the radio and television and hope to have more opportunities to do this on other TV programmes and radio stations. The people at change.org continue to support my campaign by making suggestions for spreading the story further. I have been at Blackpool Pleasure Beach today with my family and while I was there a young boy from Lyon in France, who was on holiday here with his dad and grandma, spotted me and came up and told me that he saw me on the television and wanted to know if he could have a selfie with me! I didn't believe that I'd been recognised and I couldn't stop smiling! He said I was very brave for starting the campaign and he's now following me on Facebook and Snapchat. Here is the link to my radio interview (you'll need to fast forward to 7.09am, 1 hour and 9 mins from the start) and you can see a clip from the BBC news story on the BBC NW Facebook page. Please keep sharing and retweeting my campaign and thanks for your continued support. 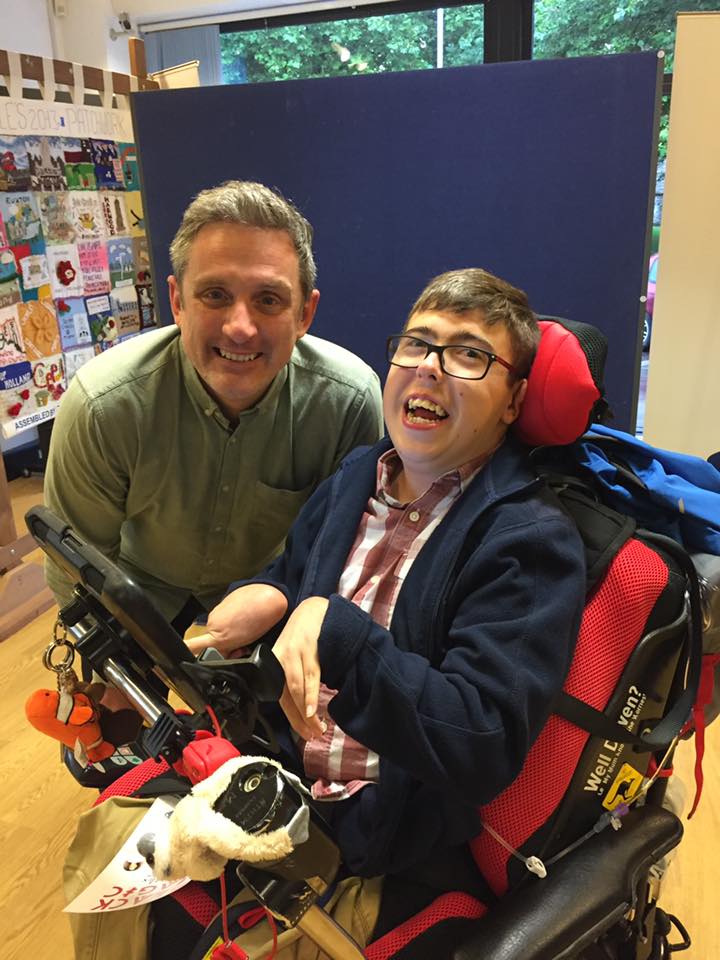 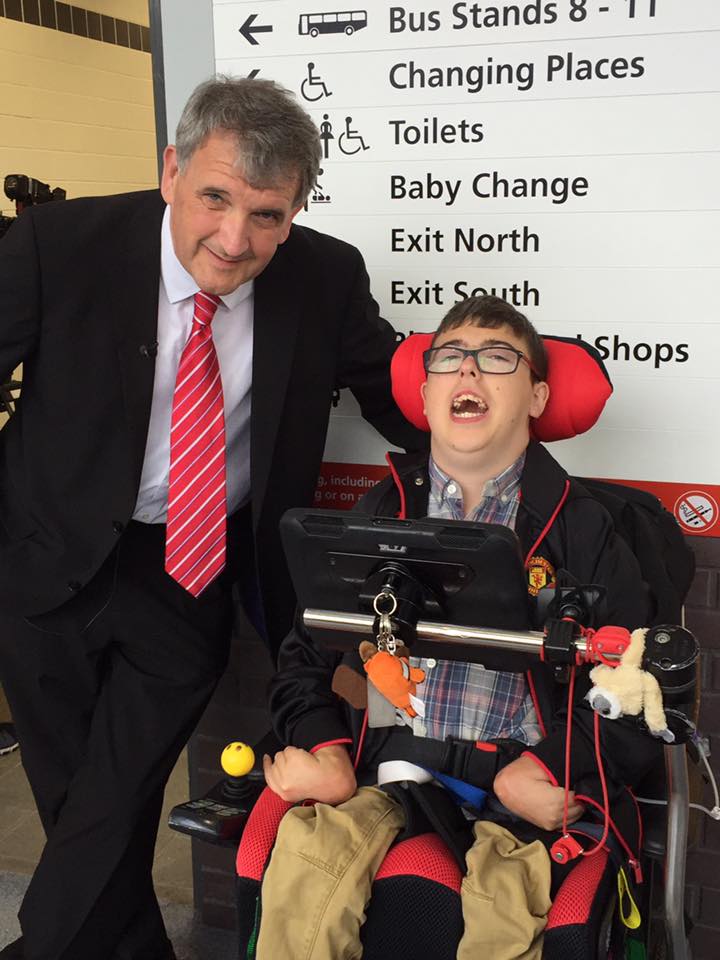 So much for a day of rest! Another busy day at Campaign HQ! I went to Blackburn Cathedral this morning where I was immediately greeted by two of the wardens who recognised me from this week's TV news reports! Then on the way out Canon Hindley told me the cathedral community would support my campaign and would look into installing a changing place too as soon as it was possible. (By the time we got home they had already tweeted my campaign). Later I popped to Tesco later this afternoon, and was spotted by four people who recognised me. And to top it all I received a message from a reporter at The Guardian newspaper asking me to get in touch as they're very interested in my campaign story! Before going to bed I sent another round of emails to the food, drink and fuel outlets at the UK service stations along with emails to the Guardian, ITV news, This Morning, Watchdog and others!  Oh and in case you haven't seen today's figures, my petition has now topped 23,000 signatures! Amazing! Thanks for the continued support!

Day 17 and my petition has topped 25,000 signatures! This time last week we were on our way home from a short break and I was excited about having 2000 signatures and about my radio and TV interviews with Graham Liver and Dave Guest the next day. My campaign is now attracting more national interest with a message today from The Guardian and from north west MP Paul Maynard who is a transport minister. I am also hoping to get a feature on 2BR radio soon! And in case you missed it, the wider issue of accessible Changing Places was featured on ITV's 'Loose Women' this morning. Keep sharing, Facebooking, Tweeting and emailing my updates. Thanks for the support.

So today the Facebook and Twitter updates have continued and I have been busy emailing Members of Parliament and TV and radio programmes about my campaign. I was delighted to see a big article about my campaign on page 2 of the Accrington Observer today when I was at Asda! I wanted to get some t-shirts printed to advertise when I'm out and about, but after getting some prices locally we decided it was cheaper to do our own printing. I'm really pleased with the results! Thank you for your continued support. 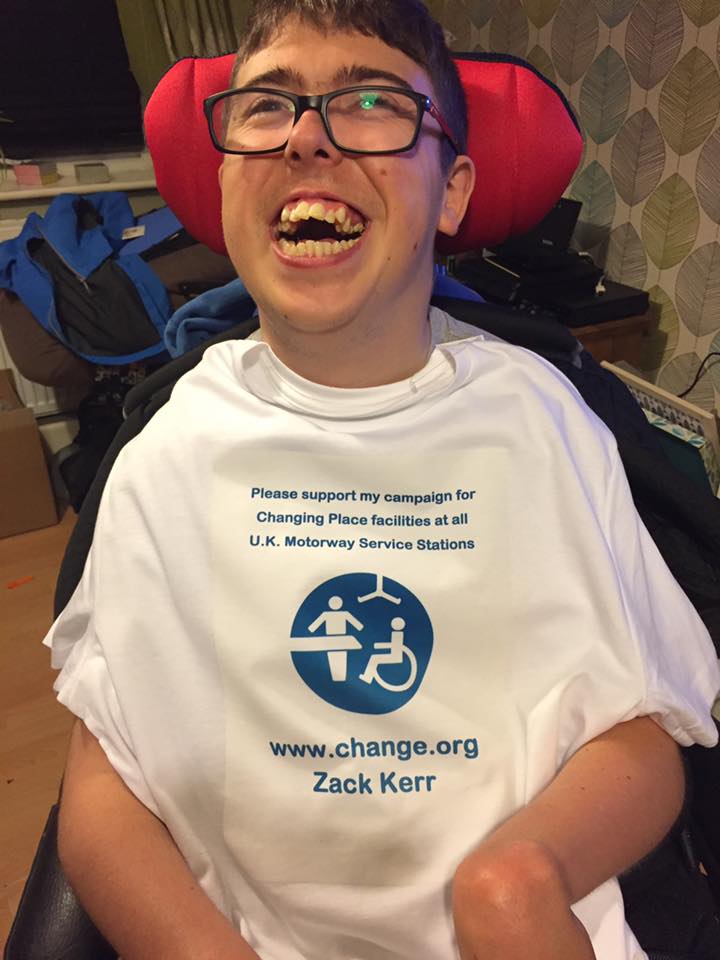 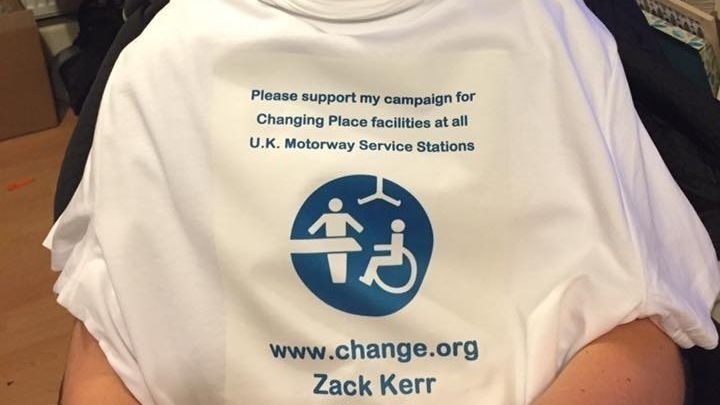 Another busy couple of days at campaign HQ with tweeting and facebooking! I was delighted to see a post from 2BR Radio on Facebook yesterday morning and even more surprised to hear them broadcast my story on their news bulletins throughout the day. They also published a lengthy article on their website with a link to my campaign which is great! Check out their link https://www.2br.co.uk/news/local-news/2366140/thousands-back-accrington-mans-campaign/ I also received a tweet from Manchester based group 'Puppet Theory' who invited me to one of their gigs and although I'm unable to go, they tweeted information about my campaign to all their fans and followers!


And finally for today, I received an email from the Chief Executive of RoadChef! But more about that in my next update! Keep sharing and encouraging your friends and family to sign up!
Thanks
Zack